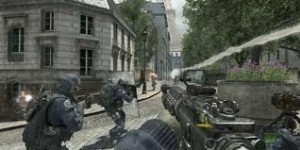 Full disclosure: I SUCK AT THIS GAME.  However, recently I’ve begun to improve at a, er, clip– all by following these tips, and I wish someone had calmly explained all this when I started, because these are the basics, the fundamentals. Which means you get nowhere if you aren’t following them.  Moreover, these tips really do work for any multiplayer first-person shooter, excepting the specifics around kit selection and specific weapons.

This advice only applies to ‘hardcore’ mode.  Hardcore mode basically means it is much more likely that any direct hit will kill or seriously would you.   Non-hardcore mode is, in my opinion, a noisy mess, and it takes three times the number of bullets to bring someone down.  This ruins a lot of the subtleties of the available weapon selection, and some weapons, such as pistols, don’t even work.  By contrast, hardcore mode is much more interesting.

Anyways on to the rules.

1.  Two words: Sight Lines.  IRL we have a thing called peripheral vision, which allows us to see simultaneosuly in front of us, to our left and right.  In a first-person shooter, you can see  in front of you, period.  This means you will get shot, regularly, by someone you can’t see from your left, right, or behind you.  The thing to do here is extremely simple: keep moving.  When you do stop, make in in a place where you have the maximum number of directions visible to you and the maximum number blocked to your enemy.  Corners are essentially ideal, but everyone is always looking there.  This strategy of moving from cover to cover will get you called a camper, which is what players call someone who doesn’t move.  You are moving from cover to cover, not camping, sprinting.

2.  Watch your back.  The only way to protect your back is to run or to have it against a wall.  See above.

3.  Be Still.  Crouch.  If you are not crouched, it’s because you are running.  To put it another way, you should be CROUCHED AT ALL TIMES.  Learn to be still when you are not explicitly doing something, because you can always see someone moving, no matter how far away threy are, and the sound quality of the game is excellent as far as hearing people running nearby.  Conversely, someone still can creep right up on you.

4.  You should probably slow down.

5.  Use custom classes to support your strategy of play.  You should have a favorite weapon and sidearm that you level-up with most rapidly, and set them aside in a class you can fall back to when things aren’t going your way.  Take note of challenges to level-up your weapons faster.  Focus on getting maximally good at one thing, then experiment around, like in college.

6.  Choose the right tools for the map.  Here are the general rules: Assault rifles work best on variable terrain with some close-quarter fighting and some distance fighting, and can do the work of a sniper rifle when outfitted with the right scope.  Sniper rifles are completely useless at anything but a medium to large distance, but outfit you with excellent camouflage. Shotguns and pistols work best up close, indoors or in confined spaces (alleyways and corridors).  Notice how the different shapes of the weapons obscure your view, and how quickly they can be drawn and reholstered.  Submachineguns and shotguns excel at putting a ton of lead in a small area very quickly, but shotguns also tend to wound on any but a direct hit.  Some sniper rifles and shotguns have the additional disadvantage of being pump-action or bolt-action, which can be unforgiving in a tense moment.

7.  Use traps.  Traps, like claymores and bouncing betties, do the killing for you when you aren’t even there.  Use them to up your numbers.  Augment them with advantages like Hardline Pro to get faster access to bigger and better weaponry that– you guessed it– does the killing for you.  You can be two places at once!  As you improve, learn to flush enemies into traps.  Also, don’t be afraid to pick them up and move them somewhere more effective.  And note that traps covered in smoke can’t be seen and are easily tripped.  Finally, traps, when ripped, make an audible sound– you can hear your own and your enemies’ traps when they are set off.  You can use this not only as a gauge of danger but also as crude radar– it will tell you where an enemy was– or is.

8.  Watch.  Observe your enemies’ style of play in-between matches (observer mode).  They’ll almost always show you a new place to hide, to stick a trap, or a better overall approach.  Also, it tells you where they are.

10.  Grenades go where you don’t.  If there’s a bad guy in there, toss in some Semtex or a Frag.  This goes double for upstairs or downstairs areas.  Even non-lethal grenades (including, nay, especially, smoke) are almost magically effective at making an enemy flee his position.  Likewise, if you have time, they are excellent at covering your escape, especially smoke.  There is a caveat here: don’t throw them in front of you, or at an enemy who knows you are there or (this goes without saying) can see you.  You’ll still be pulling the pin out while he brings you down.

11.  Flank.  That means if the enemy sees you in one place, fall back and come around the other way, catching him off guard.  If you think this can be done inside of three seconds, you’d be shocked how often it works.  This does not work over large areas because you’ll be shot before you ever get there.

12.  Did I mention you were going too fast?  Seriously, slow down.

13.  You are most vulnerable right after you shoot someone.  Everyone heard it, the guy who was just about to shoot him saw the bullets come from somewhere, someone on the other side of the map saw the tracer fire, and two other guys just happened to be in the area anyway.  Fall back and go the other way, because you’re about to get shot.

14.  Stop holding down the trigger so hard.  If you have a problem with this, focus on one of the guns that do 3-round bursts.  If you can learn to pop off quick, small bursts manually, your accuracy will improve.

15.  Play a lot of Free-for-All first, to improve your skills and unlock weapons and equipment faster.  Your number of kills on team games will necessarily be smaller since a lot of other people will be involved, so free-for-all is the most efficient way to unlock new guns.