In high school, I went on a fantastic 3-day trip to Lake George. The scene was idyllic: we camped on the islands in the lake, and traveled by canoe, carrying our own gear. We drank lake water. It was one of the magical moments in your adolescence, or pre-middle age, when you know you are building the memories on which your sense of the world will depend.

On the last night, some of us took the canoes and snuck away to a separate island, where we built a campfire. I assume what must have happened was that some of the kids were caught sneaking out and smoking pot. They were informed on by another student, who, for his own inexplicable reasons, chose to confront our chaperone with this information. Now, our algebra teacher may have, as I suspect he did, known what we were up to and chose to turn a blind eye, knowing that he was dealing with, broadly speaking, responsible kids looking for a thrilling punctuation mark on an otherwise quiet trip. But the kid wouldn’t let it alone, and the algebra teacher was forced to act against his disinclinaton, solving this non-emergency-after-the-fact by serving serious consequences to the kids, some of whom missed finals as a result because of one stupid snitch.

I’m going to change gears for a second here, and the intro will make sense later.

This week, as everyone knows, a kid named Ahmed Mohammed brought what might be the world’s worst clock in to school and inadvertently unleashed a 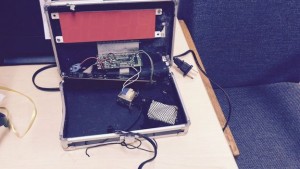 bomb panic. First off, let’s just all agree that that looks like every bomb in every movie ever, with the conspicuous absence of a visible timer and detonating material. None of us here are explosives experts and I can already hear some internet fool making the burning, urgent, and obvious point that movies aren’t real.

However, if we added four red sticks of clay in there and some duct tape, I bet we could convince a voting majority of the so-called ‘man on the street’ that we had a bomb in that briefcase, and puzzle them when we told them it was a clock.  In any other political climate, this story would be called what it is: a HOAX, and a presumedly inadvertent one, ha ha, aren’t we all dumb.

However, the story had legs for a couple of nicely pre-packaged reasons (stereotypes):

1. Mohammed is a Muslim, so the notion of him bringing a bomb into school was an off-the-rack stereotype that the administration could be readily accused of employing because,
2. Texans are stupid and racist, and
3. Public school inhibits creativity is always trying to bring you down, even in the STEM fields.

This provided terrific media fodder for a few days, including opinion pieces, late-night monologues, and of course, blog posts (ahem). By my lights, the most interesting was once again provided by professional polarizer and so-called Islamophobe Bill Maher , also sexist, racist et. al., depending on the invoker. This is relevant here because of #1 above.

Once again I find myself resisting the popular narrative and, by extension, sympathizing with an incredibly unpopular position.

Now: obviously the teachers overreacted, but so did everyone else. People seem to be in the habit of putting words in Maher’s mouth. I agree with him on some things and we disagree on others– but I think he almost always provides an invigorating perspective, even if– especially if– I’m only invigorated to argue with it.

To wit: the week of September 11 a kid walks in with a briefcase. Inside is a device that is unasked for, conforms to no assignment, and is intended solely for the eyes of his engineering teacher, who then, in a fit of wise foresight, advises him not to share with anyone else (read: ‘my dipshit colleagues who will probably think it’s a bomb, ha ha haaaa’). Per the photo, it actually looked more or less like every bomb in a suitcase from TV, minus explosives. That how much it looked like this-or-that can be argued, but it clearly looks more like a bomb than a clock. Then again, neither does a pressure cooker in a backpack, I suppose.

The device starts beeping in another class. Kid goes to principal’s office, cops are called. Kid insists the device is a clock. Critically, the school is not evacuated. This has been taken as evidence by some astute observers that the administration knew it wasn’t a bomb. This may well be true, but I see a gradient emerging, here.  (Note: it was also put forward by some that he did the clock as a deliberate hoax, I see no reason to believe that claim either.)

In a fantastic confluence of stupidities, this child is arrested.  I must go to pains to state that nearly everyone universally agrees that the arrest was unnecessary and the result of a terrible misunderstanding, which is about as satisfying as it sounds.

Now, I speculate: Clearly the teachers didn’t know what they were looking at WASN’T a bomb, that is, it still could have been, but they were probably 95-98% sure that it wasn’t (accordingly, 100% surety, for example, an actual alarm clock, would merit no police intervention). What I believe that differs from others is that while I think they probably didn’t believe they would explode, as usual, institutional fear crept in and no one wanted to risk being the one who didn’t do something. That 2% of not-knowing is enough to warrant a call to the cops as a measure of cover-your-ass prevention, that is, if you like having a job.

But somebody snitched, and those otherwise disinclined to take action were now put in a position to have to do something.  The problem wasn’t the smartest person in the room, as usual, it was the dumbest– you know, the ones we urged: “if you see something, say something,” which they dutifully did, and now someone had to do something.

So they wanted to keep their jobs, but knew that evacuating the school was 100% sure to cause a panic, especially later when parents demanded answers as to why the school was evacuated. Again, its not going to explode, but that 2% is where you lose your job. So a quiet alternative was found with less chance of professional humiliation (or not).

Meanwhile, we all have a good laugh about how stupid Texans are [because we never, ever stereotype! That would hurt feelings!] but I think we are all much better off not to have seen the kind of vitriol that might have come from the parents, in that case. They would have called for this boy’s head, bomb or no bomb. The school was clearly thinking about this as well, which explains the letter they sent home to parents the next day.

It’s important to flip the question: what if the kid was white? Would he have been treated the same way? Probably not. The linkage to Muslim terror seems to be inevitable, especially when confronted with a beeping suitcase. But my sense is that the motivating fear was of administrative and parental consequence. Somebody snitched, putting everyone else in a position to have to do something, whether they personally found it necessary or not. To put it another way, somebody was stupid enough to believe it WAS a bomb, and nobody else was smart enough or qualified enough to prove that it wasn’t.

The police, doing what police do, arrested him until they could get to the bottom of the situation. Once again, utterly predictable outcome.

So: to the meat. Was this racist or not?  Yes, but not purely. I see a case motivated more by institutional mediocrity than casual hate, in varying percentages.  Of course his being Muslim was relevant.  But let’s not pretend we aren’t also living in the age of Columbine and Sandy Hook.  There are worse scenarios than some science geek getting arrested that we can all readily imagine.

His religion absolutely adds weight, but given the context of school violence, shootings, pipe bombs et cetera, this is a strong enough motivator to have given us the situation we had. I think his being  Muslim didn’t help, and maybe pushed the (arbitrary!) 98% non-bomb confidence down to 88% or 78% confidence– but it could have worked the same way if he were a Hindu. We are constantly finding guns, knives, and explosives in lockers and backpacks in American schools. This story just came extremely well-packaged for some other pre-arranged ‘terrorist’ narratives as well, and we needn’t pretend that that played no role, because obviously it did. But it might have anyway, given a certain amount of over-caution by the school administrators. You know what? I have kids in school. Take all the time you need. BE SURE.

All that said, for those of us who have seen the clock in question (and I’m no explosives expert), but I see an incredibly shitty clock and, critically, no explosive material inside.  But I suppose that depends on how you define it.