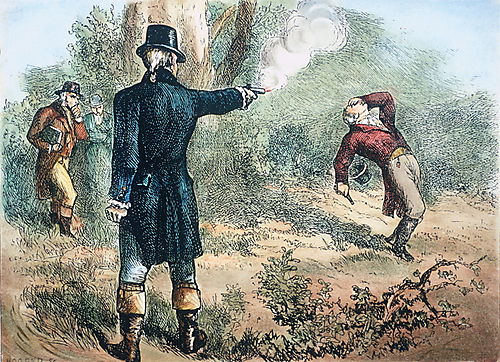 So, let’s take an updated look at some spurious claims:

Gun-Free Zones Endanger Civilians
Gun free zones aren’t intended to provide a force-field against rage shooters. Where they are most effective is when they protect the rest of us from legal gun owners that lack common sense, safety precautions, and decency, like open-carry groups at Target.  There are simply enough examples to show that loaded guns in public are unsafe, whether you are shooting yourself in gun safety class, shooting yourself in the movies, or the gun accidentally goes off.  It’s just a boneheaded thing to be doing.

Gun-Free Zones also mean the public doesn’t need to be qualified to do on-the-spot security assessments if we or professional Law-Enforcement Officers (LEOs)  see someone open carrying in the mall.  We can all safely know to run away and call the cops.

Other famous no-weapon zones: Dodge City, Tombstone, Deadwood, Ancient Athens, ancient Rome. In Athens, the belief was that it was disrespectful to the democratic project to open carry in the city area, and that the intimidation created by open-carrying “inherently undermined civic equality.”  Frankly, this seems both obviously true and obviously why most people open-carry: to confer an unearned advantage in any conflict.  Imperial Rome allowed citizens to own weaponry in the suburbs and rural areas, but they were forbidden inside of the urban center.  It’s also worth pointing out that these weapons had very little chance of being mishandled in a way that injured someone nearby.  A gladius doesn’t just ‘go off’, stabbing bystanders accidentally.  Further, a stabbing rampage is both a) identified and moved away from and b) dispatched quickly by any equally- or partially-armed group of larger size.  We see again and again that stabbers have limited body count because people run away.  In the most deadly cases the victims are confined or children.  A mass-stabbing is actually pretty difficult to pull off, unless you’re in an elevator.

Regulations Don’t Deter Criminals (e.g. Chicago)
Chicago has that many shootings despite stern gun regulations because as we now know, most of the guns are purchased outside of Chicago. The regulations are working and pushing that illegal commerce to the margins.

The unfortunate truism here is that the security fence is as strong as its weakest link.  Given this context, if you absolutely must purchase your gun in Chicago, this will have nontrivial cost implications on the black market (if you can find it, which may be more difficult for a maladjusted 16-year old wannabe-school shooter to do).

I don’t think this makes Chicago’s laws useless, but it does imply that they would work best if everyone else had them.   This brings us to an important bias we need to correct for in this discussion: we don’t need everyone to do it to see an improvement.

A common tactic on the pro-gun side is to point out weaknesses in any gun law in order to demonstrate them as totally ineffective, needlessly restricting legal gun owners’ rights.  But they don’t need to be totally effective: we aren’t trying to cheat death or stop all crime, any more than vehicle safety regulations ended all vehicle accidents.  Nonetheless, thousands of lives were saved by these regulations.

This brings me to my last point on this issue.  We need to stop underestimating the effect of small, incremental and meaningful changes.  If you believe in broken windows policing, lean startup methodology, or ‘Moneyball,’ you already know that small meaningful improvements aren’t part of the game– they’re the whole thing.  We now have research to back this up, as far as crime is concerned.  So sayeth The New Yorker:

“the central insight of the modern study of criminal violence is that all crime—even the horrific violent crimes of assault and rape—is at some level opportunistic. Building a low annoying wall against them is almost as effective as building a high impenetrable one.”

Committed actors will always find a way.  But the spur-of-the-moment shooting can become (almost) a thing of the past.

Gun Controls Are Spurious Over-Regulation (or, the cars-and-pools-are-more-dangerous and spoons-make-you-fat-so-why-bother Defense)
If a poorly handled spoon could explode, making someone else fat, you better believe society would and should make you eat your soup with a straw. I’m beginning to feel debased by having to respond to such nonsensical fallacies, but someone always wants to make them. Let’s please not talk about cars or swimming pools after this, but one last time:

Cars
Most gun control activists would be delighted with an outcome on firearms comparable to that of cars.  Imagine what fantastic data we would have on our firearms if, like cars:
1. We had to register each weapon and re-register it annually, whether we intended to fire it or not.
2. We had to subject any weapon to yearly inspection to verify its suitability for use, and it was a misdemeanor to otherwise operate it.
3. We needed liability insurance for each weapon.
4. We needed to take a course and be licensed by a specialist instructor before firing a weapon.
5. We had a state registry of every extant weapon, and each carried three to five distinct ID marks, with two known only to manufacturers and law enforcement, and a set of easy procedures for interstate identification
6. Improper storage or display could get you a ticket.
7. Sale or transfer of a weapon involved an exchange of title.
8. We kept our weapons stored and locked.
9. There were additional taxes on bullets.

While many firearm libertarians will no doubt see any regulation as an unjustifiable intrusion,  I actually see this as a missed opportunity for the gun industry, even though many of these apply in certain states already.  If the car market is any indicator, there are tremendous business possibilities baked into the system here, in the regulations, the market and aftermarket, and more opportunities for customer touch-points. You can only lead a horse to water, I guess.

So, yeah– the car comparison is apt– and my side would be happy if it applied. It doesn’t.

Pools
First off: pools are indeed more statistically dangerous to their owners than guns.  That is very clearly true.

What seems less obvious  is that pools are statistically only dangerous to their owners and their families.  If you could bring a pool to the mall, or sneak it into the movies in your jacket, we’d be having a very different conversation about externalizing risk.  A pool also can be secured many simple ways that dramatically reduce the exposure to danger. It IS dangerous. But it’s statistically dangerous to you, the owner.

Finally, as Adam Gopnik points out, at this moment in history the proverbial pool of gun violence is overflowing with the bodies of neighborhood kids. Sometimes having a pool is nice, but with this many dead kids floating in it, we’d have to be monstrous not to have it filled.

Spoons Make You Fat
The pro-gun movement often advances the argument that guns, as inanimate objects, don’t cause mayhem any more than spoons make you fat.  This appears to be an attempt to create a reducto ad absurdiam, I hope.

It’s just a stupid thing to say, and you are stupid for saying it.

Guns Don’t Kill, People Do (and Mental Illness is the Culprit)
Actually, people mainly just injure, unless there’s a gun in the picture. It’s really hard to reliably kill someone without a gun in the same amount of time as you can do with a gun.  They’ll always find a way to do it, it’s just that guns remain the BEST way.  Or as David Frum put it: “Every mass shooter has his own hateful motive. They all use the same tool.”

Mental illness is indeed a culprit.  Also, sometimes carelessness, temporary depression, poor judgment due to alcohol and drugs and just generally being the kind of dipshit that points a loaded weapon at someone is the culprit.  Crazy happens. Stupid also happens– ask how many people in prison are there for something they did while drunk or high (spoiler: most).

There is no reason that a solution that addresses mental illness can’t work alongside a solution that reduces access to weapons in the first place, and that kind of cross-disciplinary solution is the only approach that is going to work with an issue of this complexity. That said, too often in this debate, mental illness is brought out as a tactic to distract from the core issue.

Here’s a statistic we never talk about because we can’t talk about it: the amount of killing/suicide that was averted because the household didn’t own guns.  This seems impossible to reliably prove, and yet our intuitions can readily extrapolate that given how many guns deaths we already have given x gun supply in y houses, how much of a spike are we looking at, given a gun in all houses? Certain countries (e.g. Switzerland) endure this already, and have extremely strong controls around the legal usage and transport of the gun.  The ammunition supply is audited.  The gun is kept locked in storage.  The weapon is envisioned for use in defense of the nation, not to protect the household.  This is a non-trivial distinction and constrains the likelihood of accidents.

Growing up, I knew kids whose parents had guns. Every one of them thought of themselves as responsible gun owners (one who I will not name was an executive in the NRA). And every time, EVERY TIME, that gun eventually came out, and about half the time, was fired, usually behind the parents’ back. So, I’m not surprised we see this kind of shooting. I’m surprised we see it so little. (Incidentally, the NRA kid actually defended his house from a home invasion. That ended with him cutting the robber, who was probably looking for a TV but would have found the mother lode of guns, quite badly with a samurai sword. The man of course, was trying desperately to escape when he was cut, so my friend didn’t need the gun in two different ways).