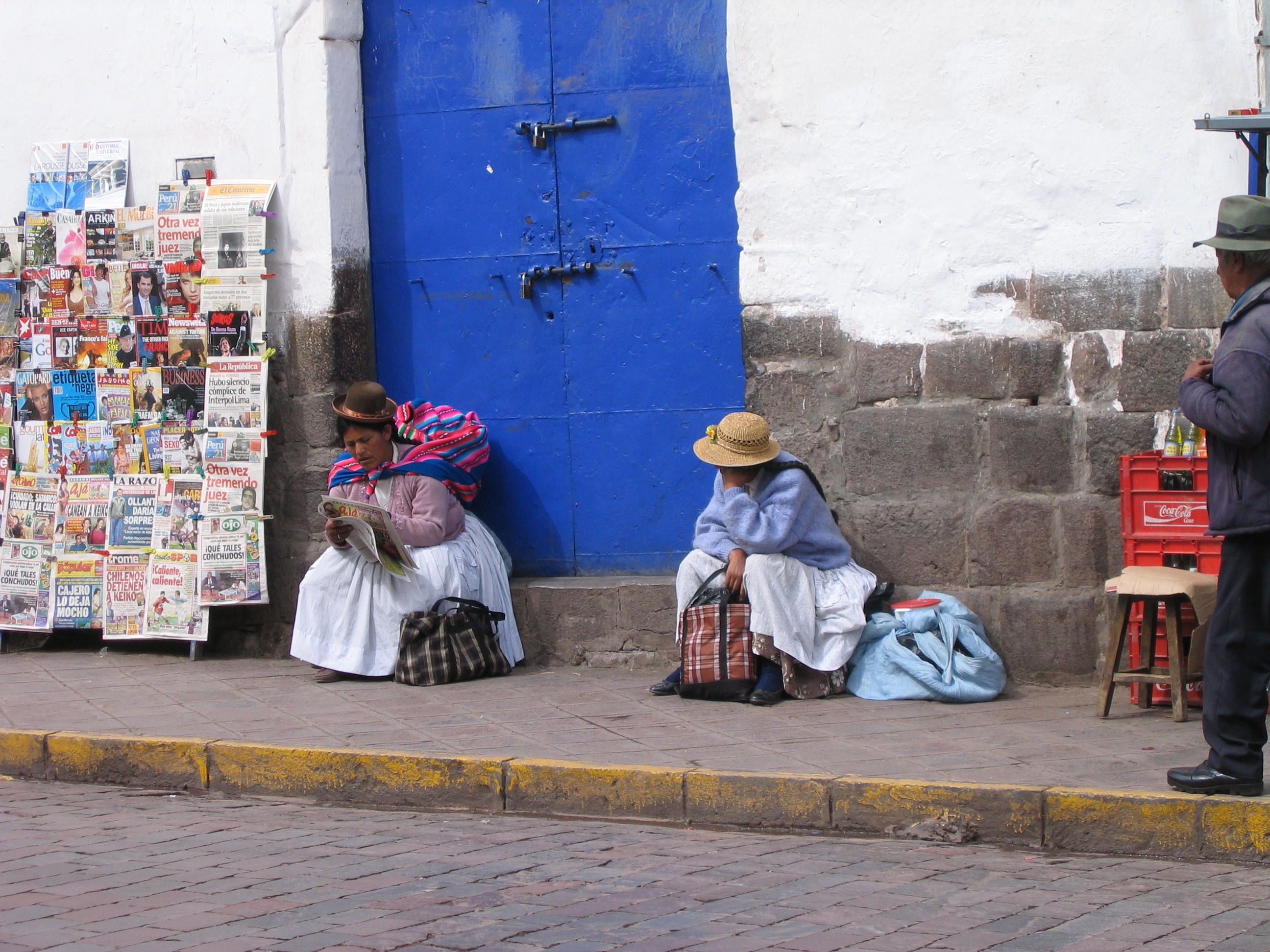 We arrive.  The airport in Cusco is quasi-tropical.  Booths have been crammed in like a wondrous jungle trade show, icons like parrots, llamas, all in the ubiquitous native patterns.  We are met as we leave the airport by Monica, out contact supplied by the travel agent.  She is, like so many of the women, of indeterminate age, with crooked teeth, in a suit-top and pants.  Her jet-black hair is kept in a braid, local style, and she explains to us the rundown of our week here.

Cusco is a tourist mecca, no doubt the largest in Peru.  The center of the city is designated by two ancient churches, one the city Cathedral and the other, I believe, is the Jesuit’s church.  The rectangular square is demarcated by cafes, artisans’ shops and restaurants, all top-end.  Many have second-story balconies that offer a view of the plaza below, the bright flowers, the children in the square trying to extract money from the tourists.

The first thing to mention is the altitude sickness.  The case for this may have been overstated.  I’m feeling OK, although I could tell the moment we stepped from the plane that the lack of oxygen was kicking in, first it makes you feel slightly buzzed, slap-happy.  After a while, a mild headache sets in, the tea, served everywhere and called Mate, is critical here.  Basic tasks, like climbing a set of stairs, take on a new dimension. Imagine the rhythm of your breathing being off, needing to exhale suddenly , needing to breathe in when you thought you would have to push out.   I found myself panting, even drooling slightly from the corners of my mouth.  So we chose to nap in our hotel, which was more necessary than we had anticipated.  Then, by about 2pm, we hit the town for a late lunch.

So, skipping ahead, we spent the next few days exploring.  We did a river raft “adventure”, which due to rain ended up being us and a guide, and a fairly mild river.    We explored ruins on horseback.  Sacsayhuaman, the “Temple of the Moon”.  We explored the city on foot.  And most of all, we prepared, acclimatizing ourselves for the trek ahead.  We dodged the children, who were amazingly persistent, breathlessly alive.  We take photographs.  They can separate your from your money near-instantaneously.  “You are a bad man,” One of the girls says to me after I don’t give her all the money she wants.  J gets a photograph of the moment, of the girl’s expression (and, expertly, later delivers this to me on the side of a photo-customized coffee mug some months later).

On the return trip from the horseback ride, I catch a view of something that sticks with me.  My horse is being led by a local boy, our guide’s assistant. Our guide has abandoned us a few minutes into the tour, when its clear we’ve already paid and are unlikely to give him any hassle.

We are at a breakpoint, having seen two of five points of interest he has sold to us on the tour.  He introduces his helper, the young boy, thanks us, and leaves.  He has to walk across a wide field to return to the tourist pick up, and watching him leave takes a very long time.  Somewhere around the moment where he is midfield, I helpfully add “he’s not coming back” to the otherwise perfect silence.  The moment is not meaningfully improved.  Despite this awkward moment, there is no getting around it.  The scenery is incredible.  We are, quite literally, in a city in the clouds.

So we just ride the horses from site to site, as led by his younger helper.  I see two young boys sitting on a rock in front of an abandoned shack.  No parents, no windows, no nothing.  He is crouching and just sobbing, screaming really, with the full force of human misery.  Alongside him is his brother, who lays there noncommittally, possibly starving, possibly hurt, possibly just enduring a moment of existential unpleasantness.  It’s not clear.  Whatever emergency they are in the process of enduring is clearly happening in very, very slow motion.  He is screaming at the top of his lungs.  It’s not pain.  He is just very, very unhappy.

It’s as if the older brother has suddenly had a piercingly clear view of his options, and realized he has been consigned to the half of humanity that will, in the words of Johan Galtung, be told to “have a cigarette, maybe a coca-cola, and wait to die.”  He is not hurt, he is dying.  And he knows, and he is screaming.  The brother does nothing, it’s as if he cannot move.  I picture us from his perspective, not even trotting, just horse-walking, behind our own film of dust and debris, a few feet away, disorientented.  There is something indecent about this revelation, a self-satisfaction, a realization of my own safety and a confidence and appreciation of my choices.

An alternate interpretation is that I’m projecting.  I’ve seen a lot already that has me spinning.

It’s not clear how to respond, or what type of intervention is appropriate, or even if one is appropriate. Indeed to the contrary it feels like that would be exactly the wrong thing to do.  The brothers barely notice us.  No, they don’t notice us at all.  I am caught in a strange loop of inaction, caught between the imperative for encounter and the uneasiness that comes from breaking a self-imposed prime directive, Star Trek-style, to observe, but not to interfere unless there is some emergency.  I do nothing.  They do nothing.  We ride away.

Later we took a taxi back to the hotel and went out to dinner.