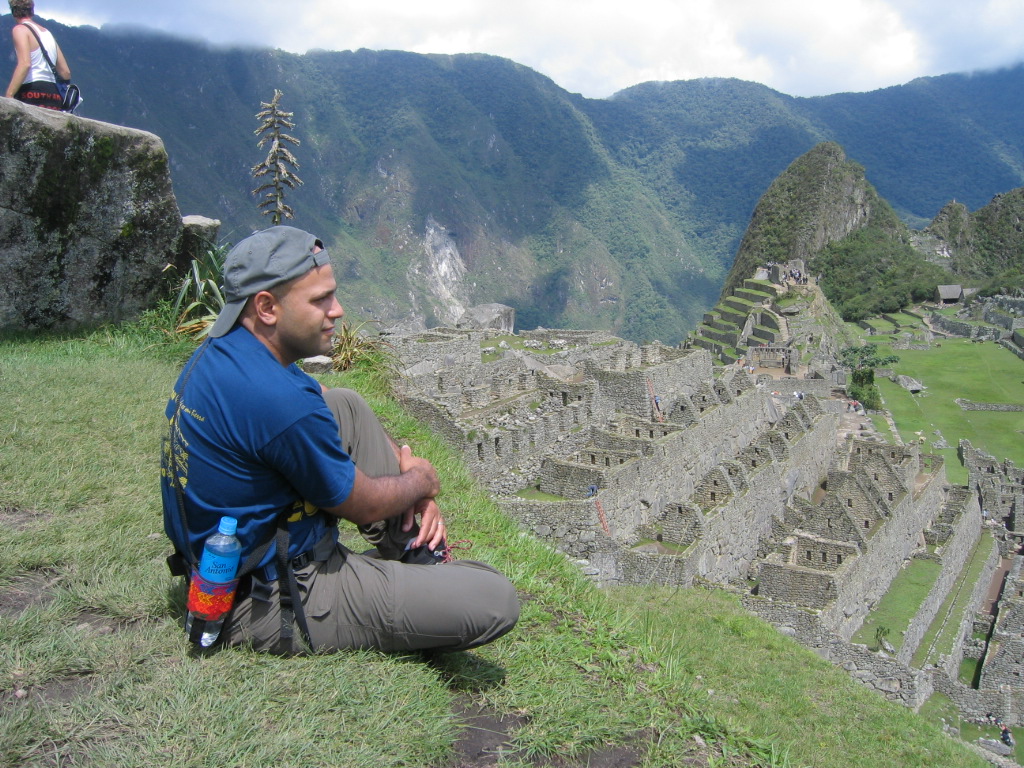 Rain.  We knew we were coming in the rainy season, and the last night delivered.  Not torrential rain, not mudslide rain, but certainly worthy of the tarps, and rain jackets and gear that we were advised about.  It was full on.

But, I get ahead of myself.  The last leg was one of the longest, or at least it felt that way.  We continued to ascend, and descend, and ascend again.  The rain was telegraphed by an encroaching fog, which mercifully dampened some of the views that might have otherwise activated a stark sense of agoraphobia.  As it stood, however, one could hear the trucks on the road far, far, faaar away at certain points, spooky echoes and ricochets of activity somewhere below.  The course thickened a bit, so that it could be said to be if not a jungle, a tropical forest, at least. Bright mountain flowers, vines peek through the stones.  The trail is no longer facing open vistas, but becomes enclosed within the branches.

The idea of Hiram Bingham discovering this trail, under layers of dirt, seems nearly unbelievable.  We see fewer other groups, as we’ve had time to space out a bit, and there are long periods of solitude.  By this point our group has all gotten to know each other a bit, and the trail might be spent talking with one or another before switching off to the next walking partner.  There is no denying it now.  We are deep within the fastness of the mountains.  There will be no more lost baggage, no more rescues.

As if in answer, a group of men armed with AK-47’s emerge from the jungle.  There is a moment of apprehension, but their tactical gear and black uniforms give them away, they are the local guards, something like state troopers or forest rangers. There are three of them, loaded for bear.

I’m reminded that not so long ago, Peru was the home of the armed terrorist group Sendero Luminoso, the “Shining Path” guerrillas who warred with the state for a generation, killing thousands in a low-grade civil war intended to bring about, of course, the ‘pure’ communist state.  In 1992 their leader Abimael Guzman was captured, slowing their agenda considerably.  It was more than ten years since they were at their strength, but I’m reassured to see these three guards here,  if only to deal with the odd bandit. Out here, we’re pretty far from any law.  They hike politely around us, the metal of their assault rifles a stark addition to the usual kit.  In a moment they are gone, disappearing into the forest.

Reaching what seems to be the day’s apex, I’m satisfied we’ve come to the most remote part of the earth when we make the last bend, and see several white guys standing in the path, drinking beers in the shade of a small house.  There’s some kind of station up here.

“Hi,” they say, waving us to come in.  They sound Australian.

I swear to God, you could literally find the end of the planet and some Australians will have beat you there, along with the odd Kiwi and an adventuresome German or two.  So while I’m a little surprised, I’m hardly shocked to find them up here.  There’s a few groups up here already actually, and what appears to be a small store that sells water and candy.

Inside the store there are dozens of other people, including a guy I recognize from New York.  We’d trained martial arts for a couple of months together before he left the school.  There is something obvious about running into someone you know from NYC up here, it’s more likely than running into them in certain parts of the Bronx, that’s for sure.  We share a couple of laughs.  As my friend Tim once said, it’s a small upper-middle class world.

It starts to really pour.  Dinner is in the tent, and afterwards we find some more squat toilets– the local variety, and eventually bed up for the night, as the rain starts to come down.  We enter the tents at a belly flop, then rolling over to take off wet shoes without tracking them into the tents.  Everyone knows we’ve come in the rainy season, we did this deliberately of course, to find the trail less crowded, but the forecast isn’t good for the next day, and there is an unspoken unease that the high point of the trip may be rained out.  One of the most dramatic points of the trip is supposed to be the so-called “Sun Gate,” the dramatic vista that presents the whole of the Macchu Picchu complex from above.  At this rate, the sun gate won’t be much to see, as everyone is coming to understand.

In the morning after breakfast we start the final leg of the trip.  Predictably, we arrive at the Sun Gate, and it is encased in fog.  Nothing is visible at all, not fifty feet in front of us.  I’m surprised our guides can identify it.  Juan steps in front of it, and spread his arms open in welcome.

“My friends,” he says,  slightly embarrassed, gesturing into the fog, “Welcome to the esacred valley of the Inca.” There is some game applause.

As we arrive at the site, there is a gate to enter, and a tourist office.  Buses are starting to come up bringing the tourists from below, those who elected not to walk the trail but drive up from Aguas Calientes, the settlement below.  We are early, and get some time to ourselves with the other hiking groups before the real groups start to arrive.  Picture time!

Naturally, it is amazing.  Over the morning the fog quickly burns off, and my agoraphobia is given the breathing room it so desperately desired.  My shoulders tighten.  Apparently, there are no such things as railings anywhere in Peru, just stairways to the open air and inexplicable drops.

Iris, another one of the local guides, finds my fear of the heights hysterical.  By way of encouragement, she does the most amazing thing, and turns herself into a human bannister, stading between me and the open drops by resting her toes on the stairs and leaving her heels out over the precipice.  It is a dazzling display of bravado, and, I appreciate, mockery.  I insist that her gymnastics aren’t necessary.  In short order I’ve explored most of the highest precipices anyway, and continue on to take the rest of site in at ground level.

We spend a few hours at the site, and after all the last pictures are taken, we head down.  A harrowing bus ride later– my cousin Joe told me before I arrived that the buses only ever seemed to “keep three wheels on the ground,” which is true, especially when passing each other– we rejoin for oven-baked pizza in Aguas Calientes, the group’s last meal together.

Stories are told, numbers are exchanged and by the end of the lunch, everyone is pointed off to their next destinations.  To my surprise, while hugging one of the Polish girls goodbye, she spontaneously bursts into sobs.  It occurs to me, that this twelve year old, fourteen-year old girl– this has been a formative event in my life for sure, how intense must this have been for this young kid?  Not knowing exactly what to tell her, I whisper to her by way of encouragement, “we’ll always have this trip together though, won’t we?”  She nods, tears running down her face.  Her father and Woycek and I embrace warmly.  Time to go.  The Irish girls pose for photos.  Laughing, hugs.  The bonds of a short adventure, like the end of summer camp.  These have been good friends.

I learn: sometimes you have no idea what kind of effect you are having on someone’s life, so be kind with people.  I wonder what kind of time I would have had as a twelve year old, and I know the answer of course.

I would have remembered everyone.  It would have been, simply, the most amazing time of my life.

One Reply to “Peru, Part 3. The Sacred Valley of the Inca.”